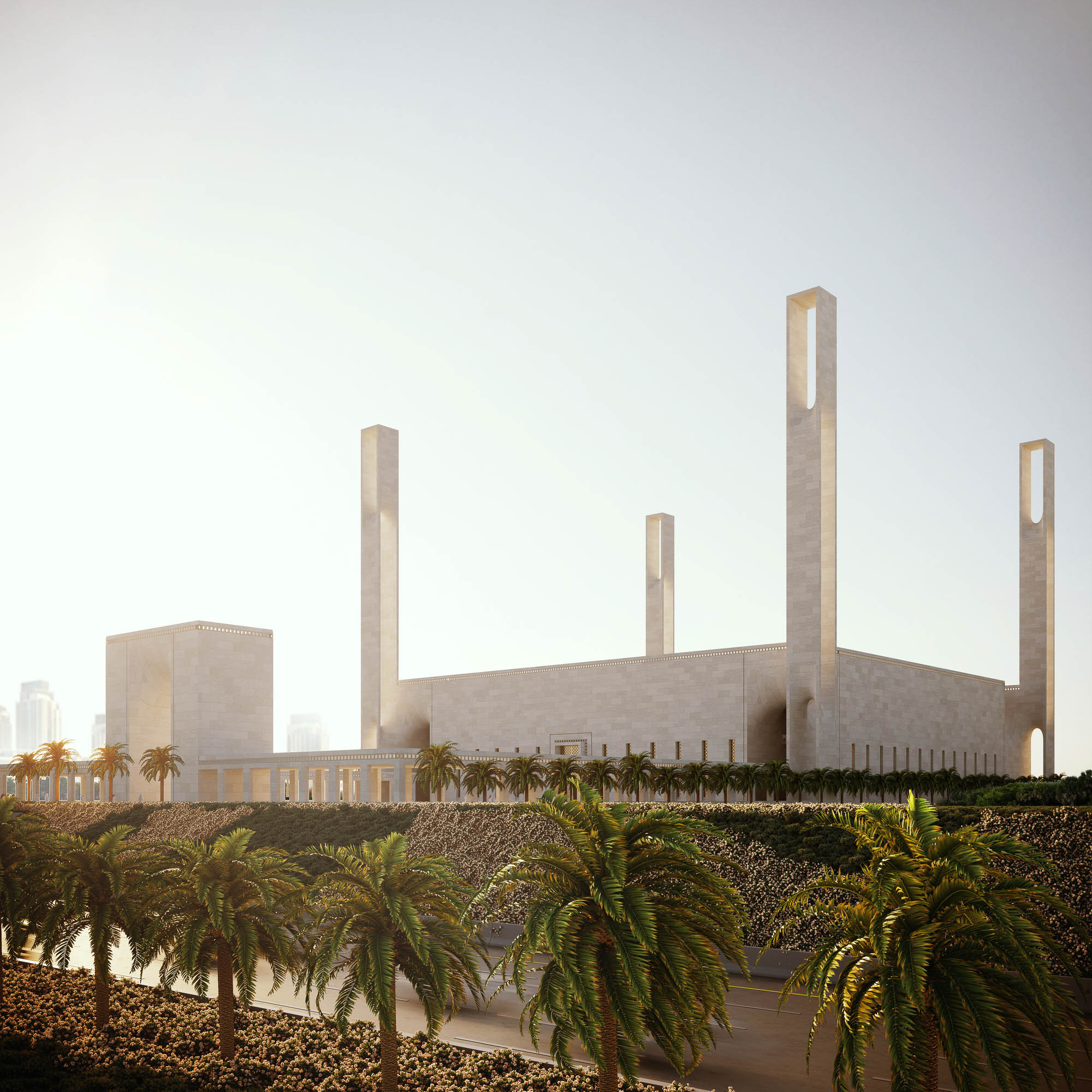 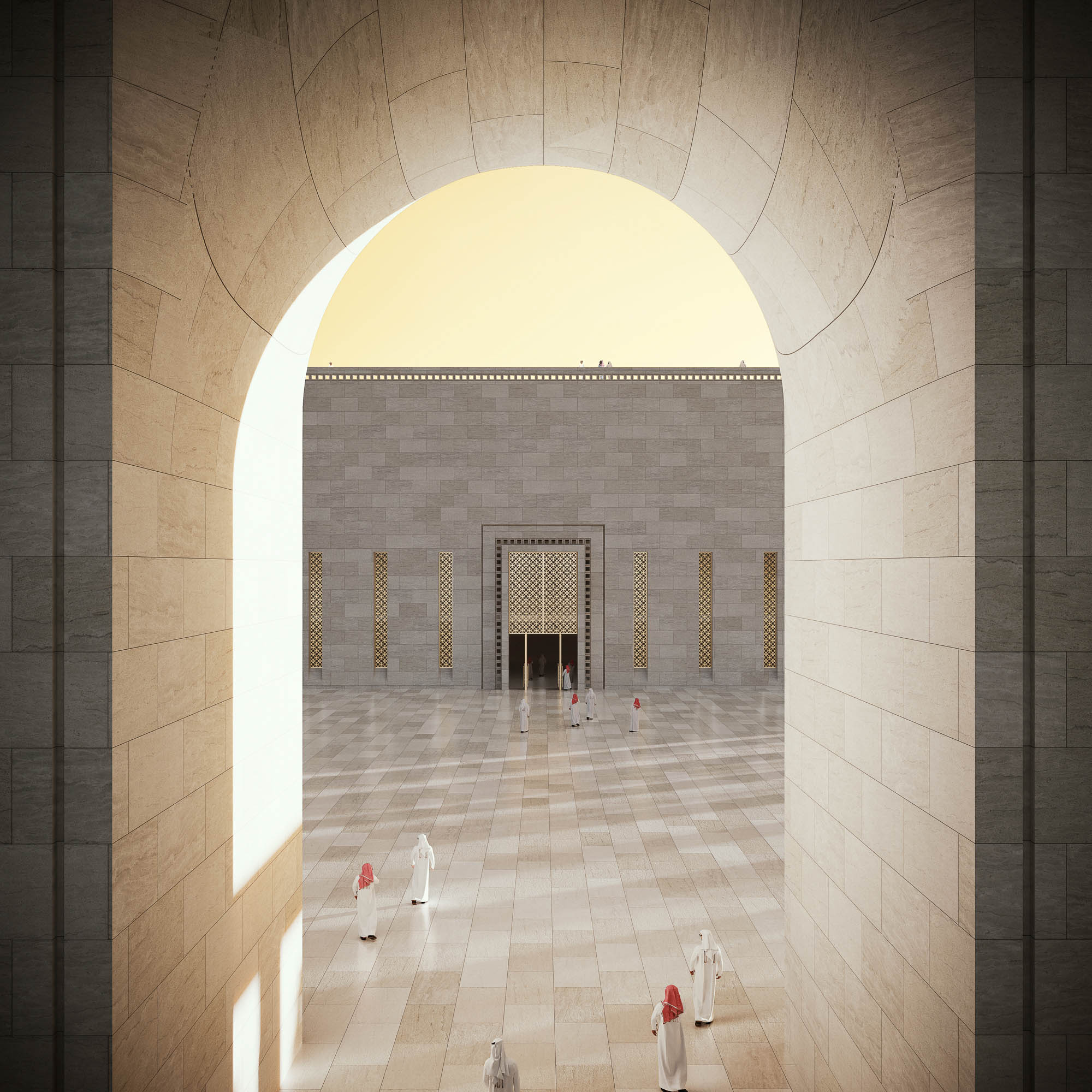 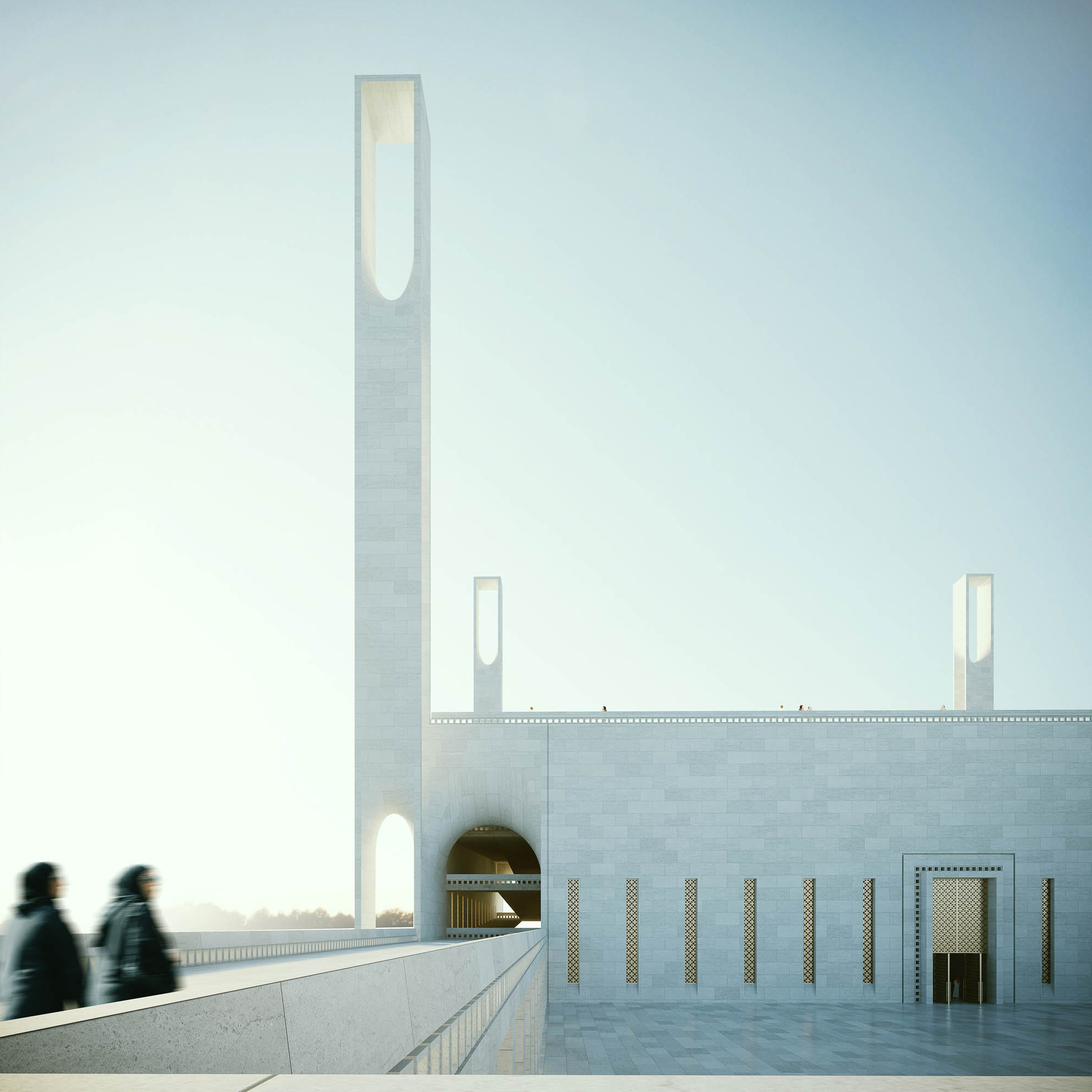 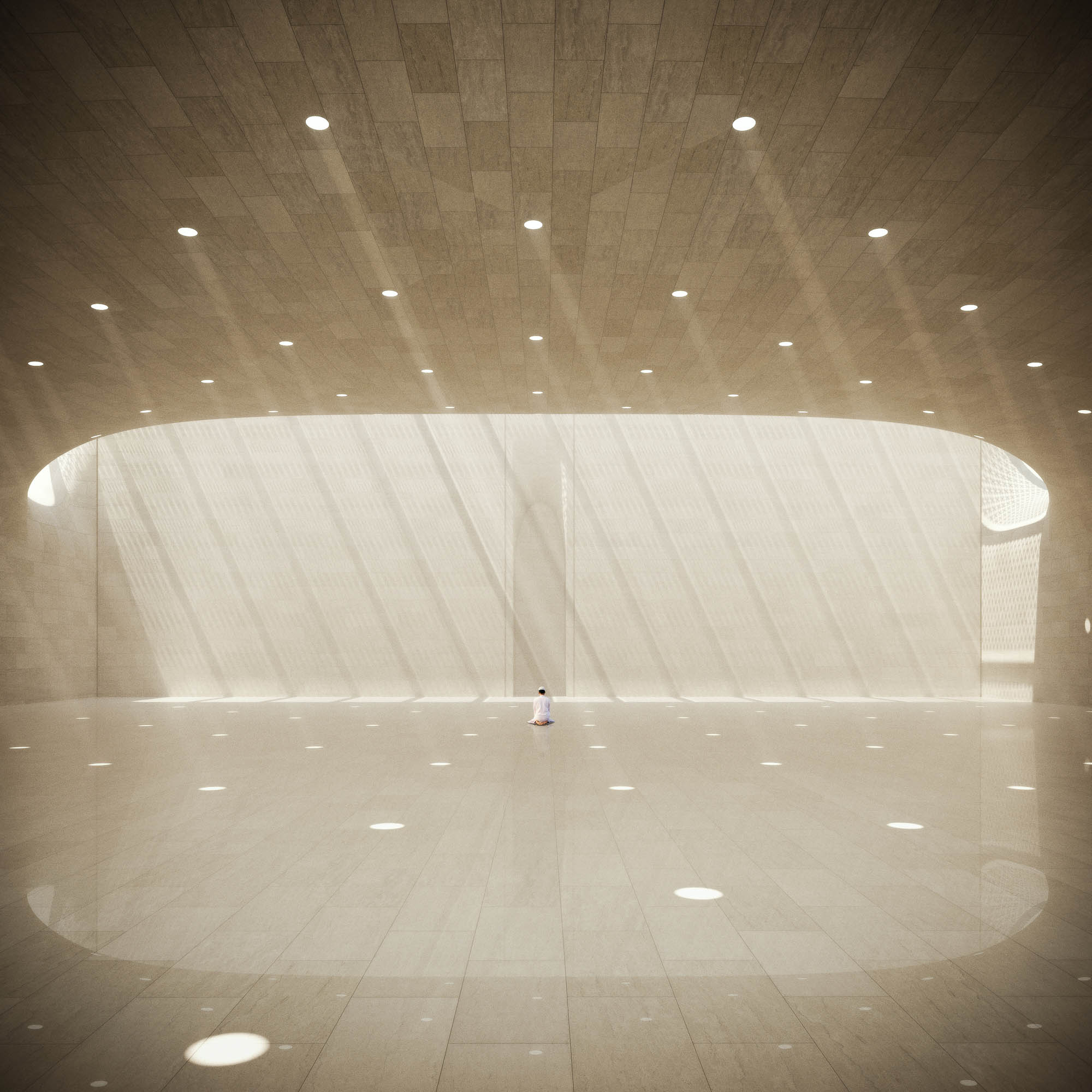 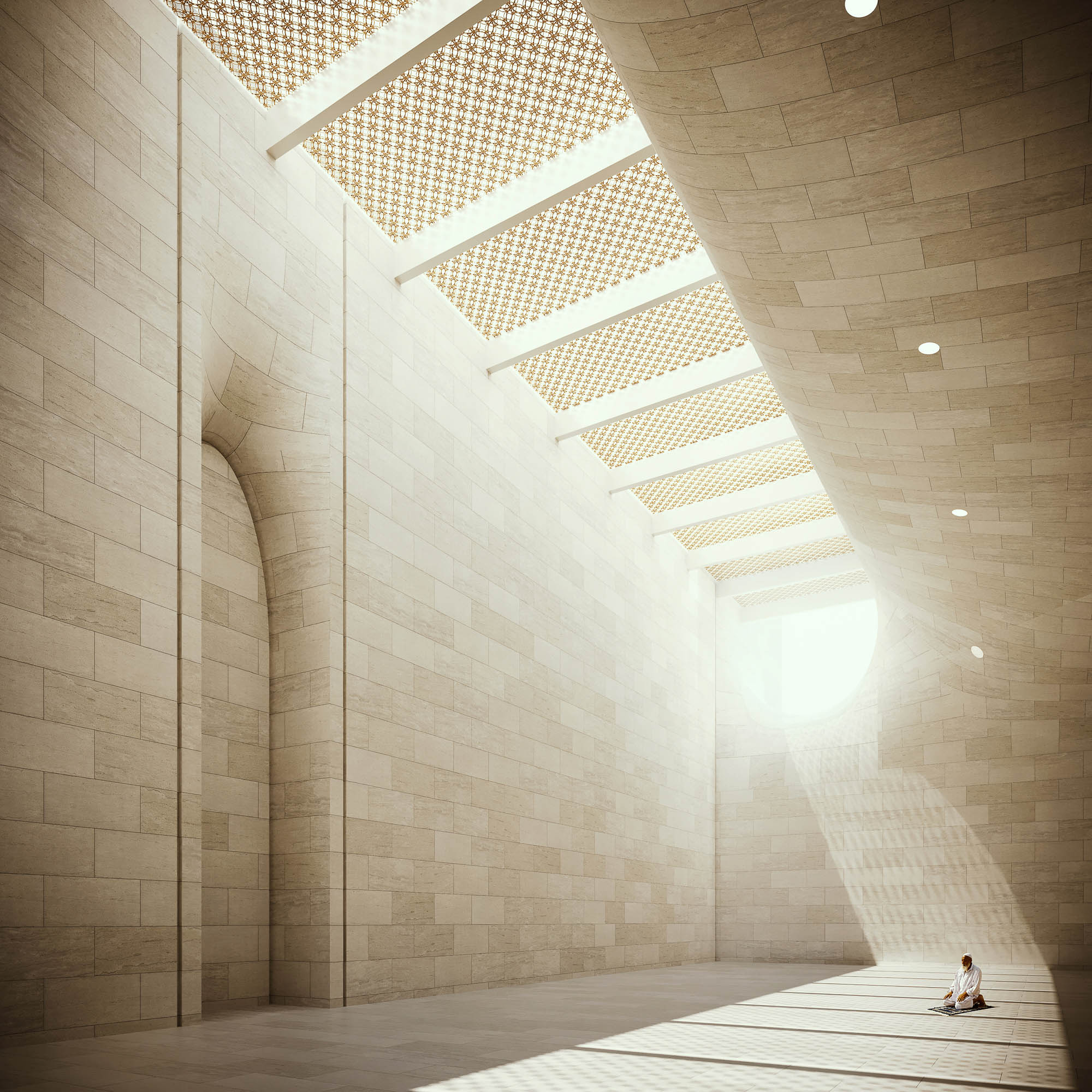 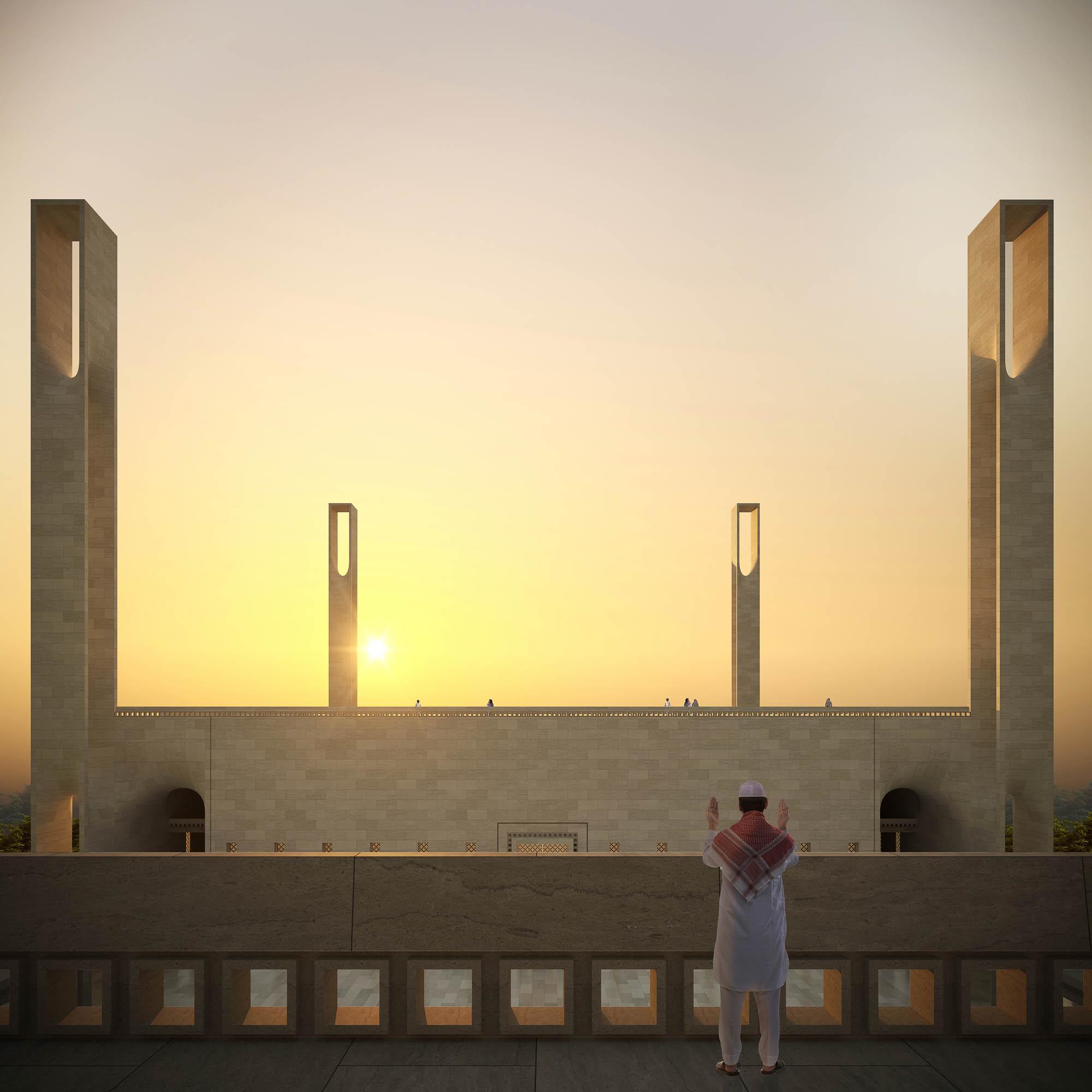 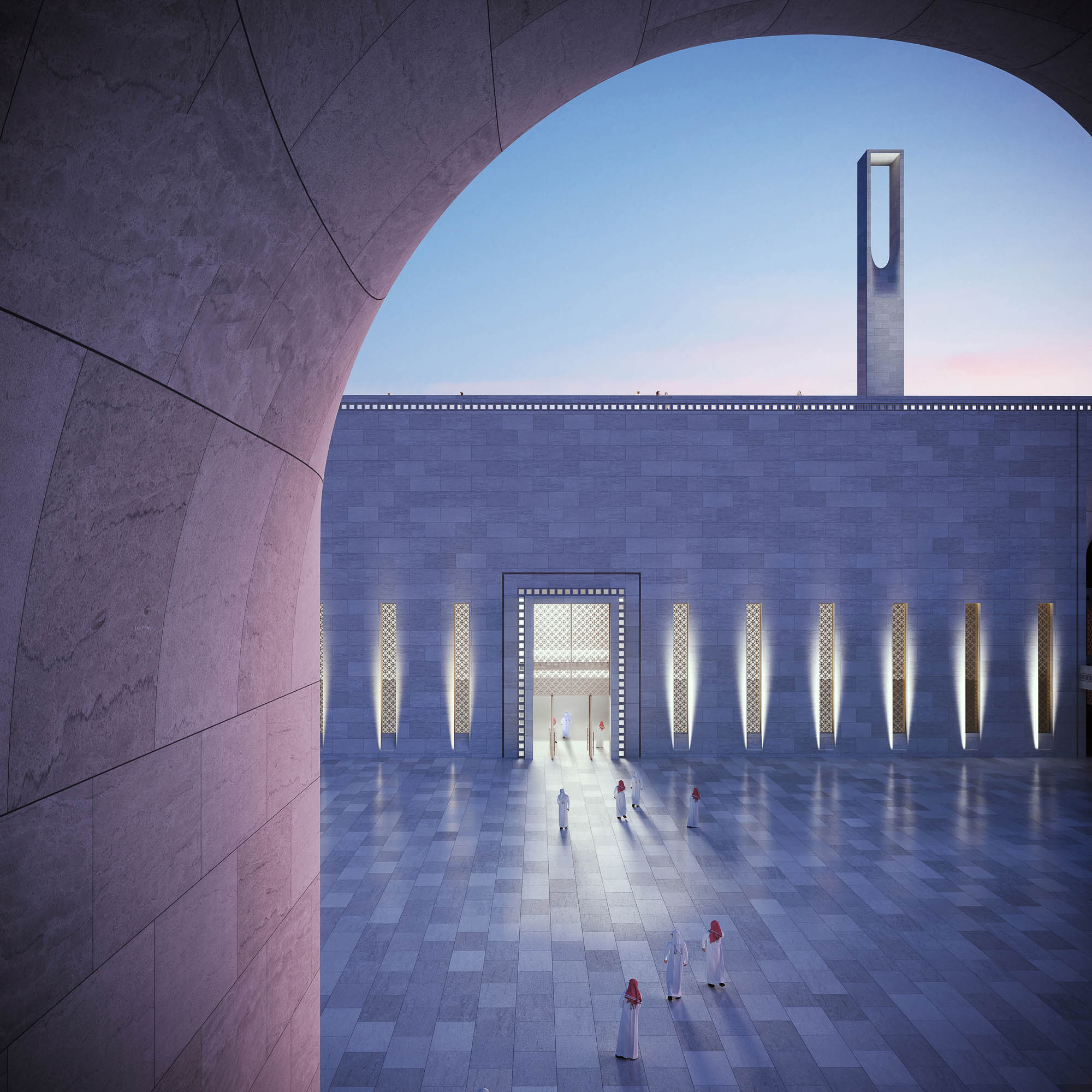 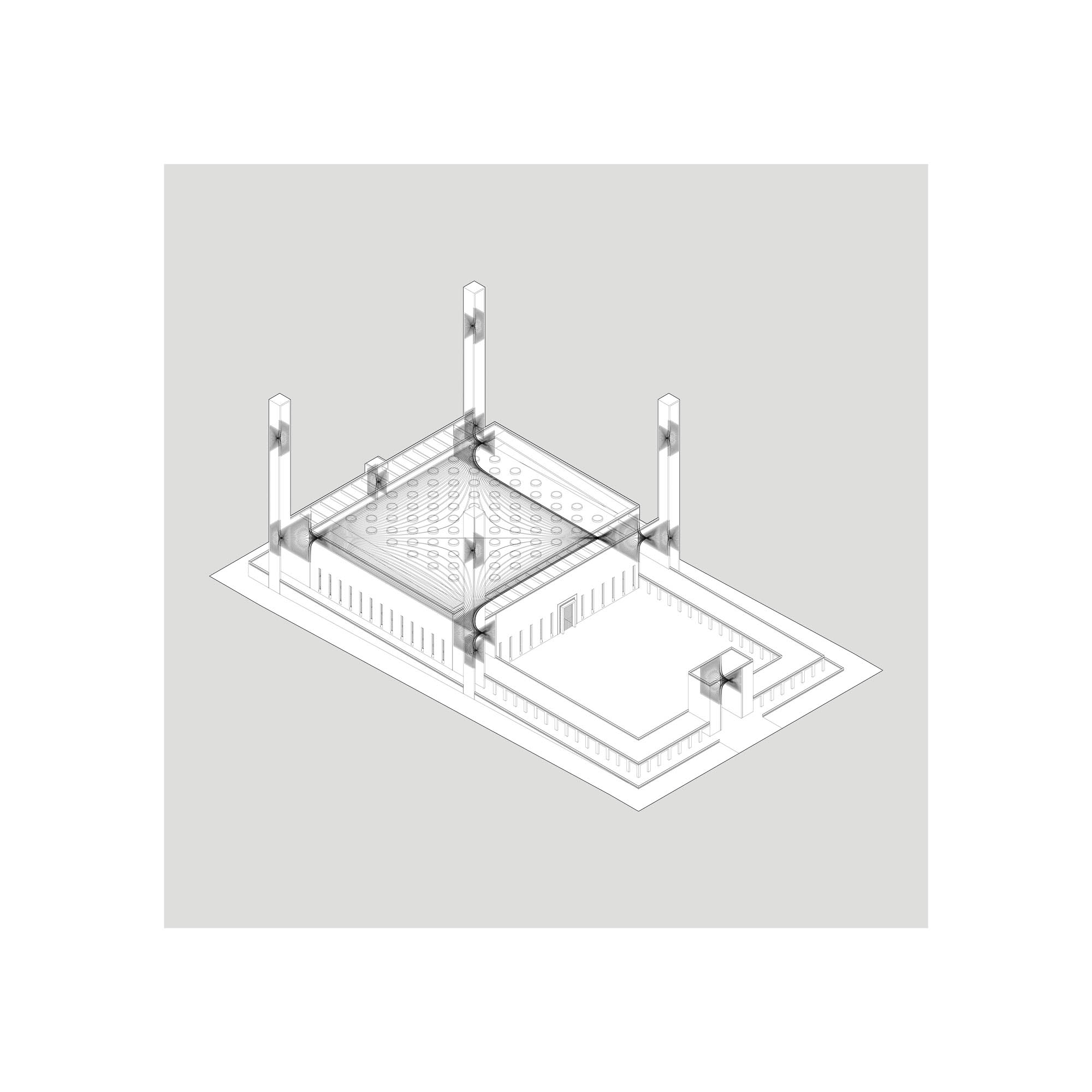 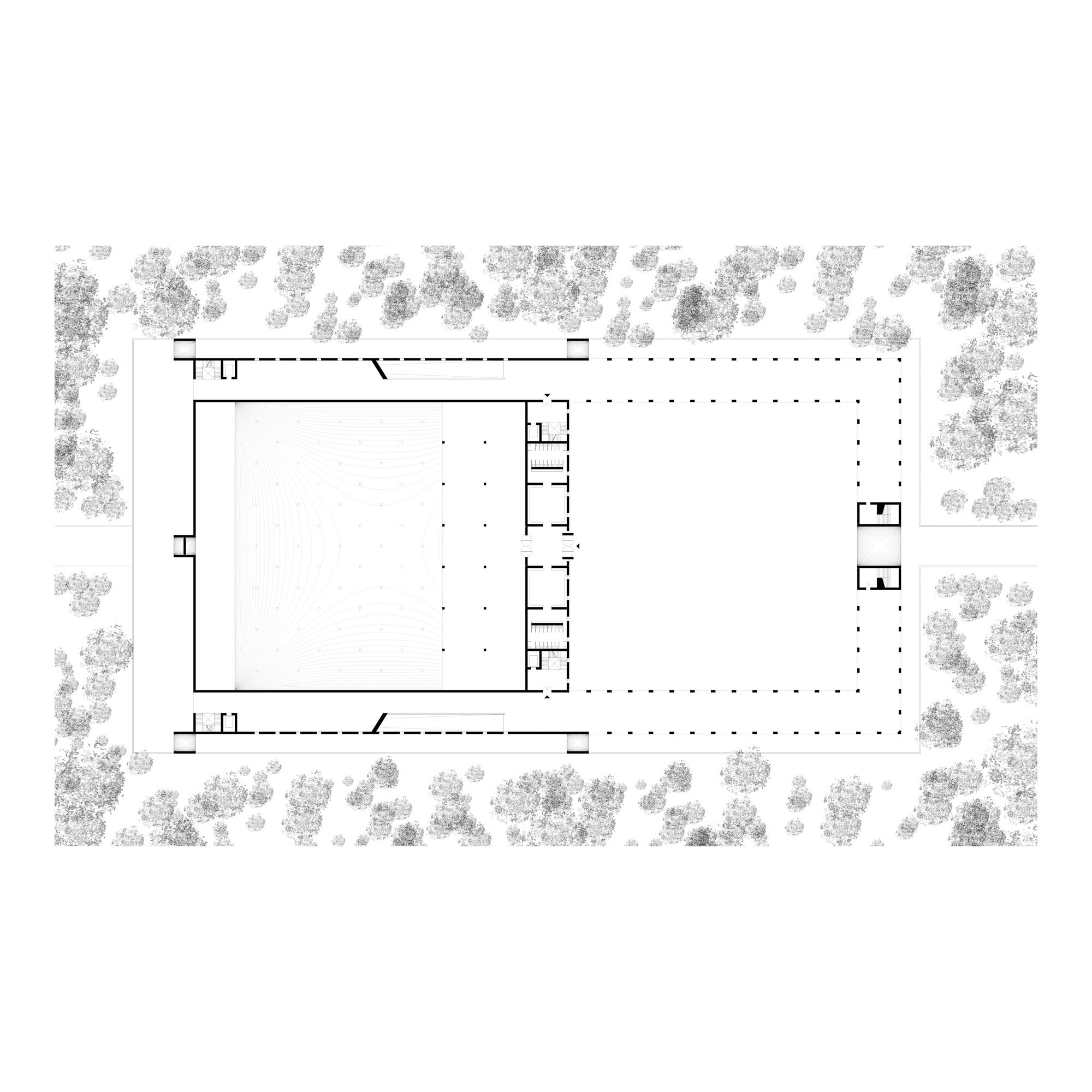 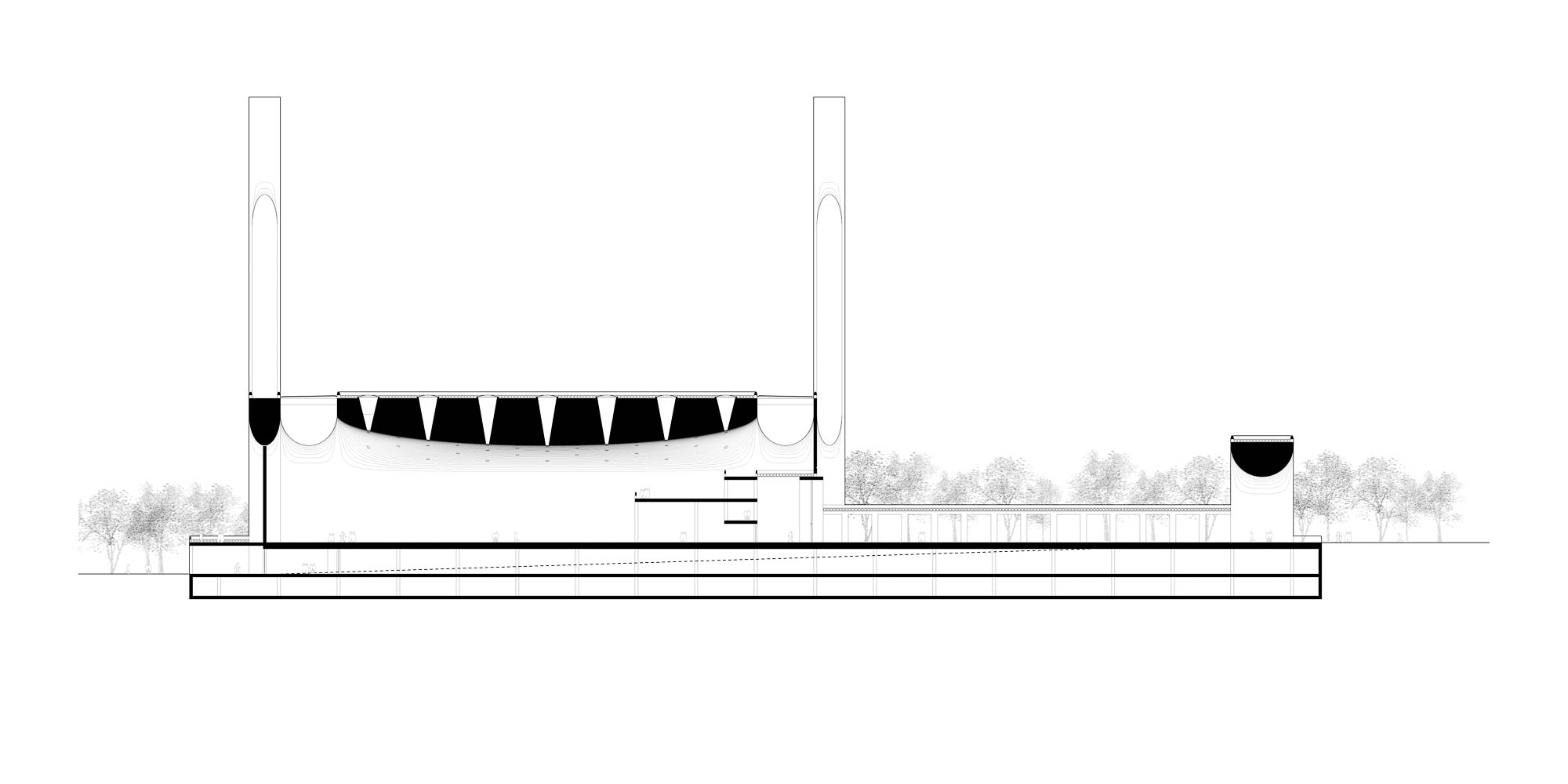 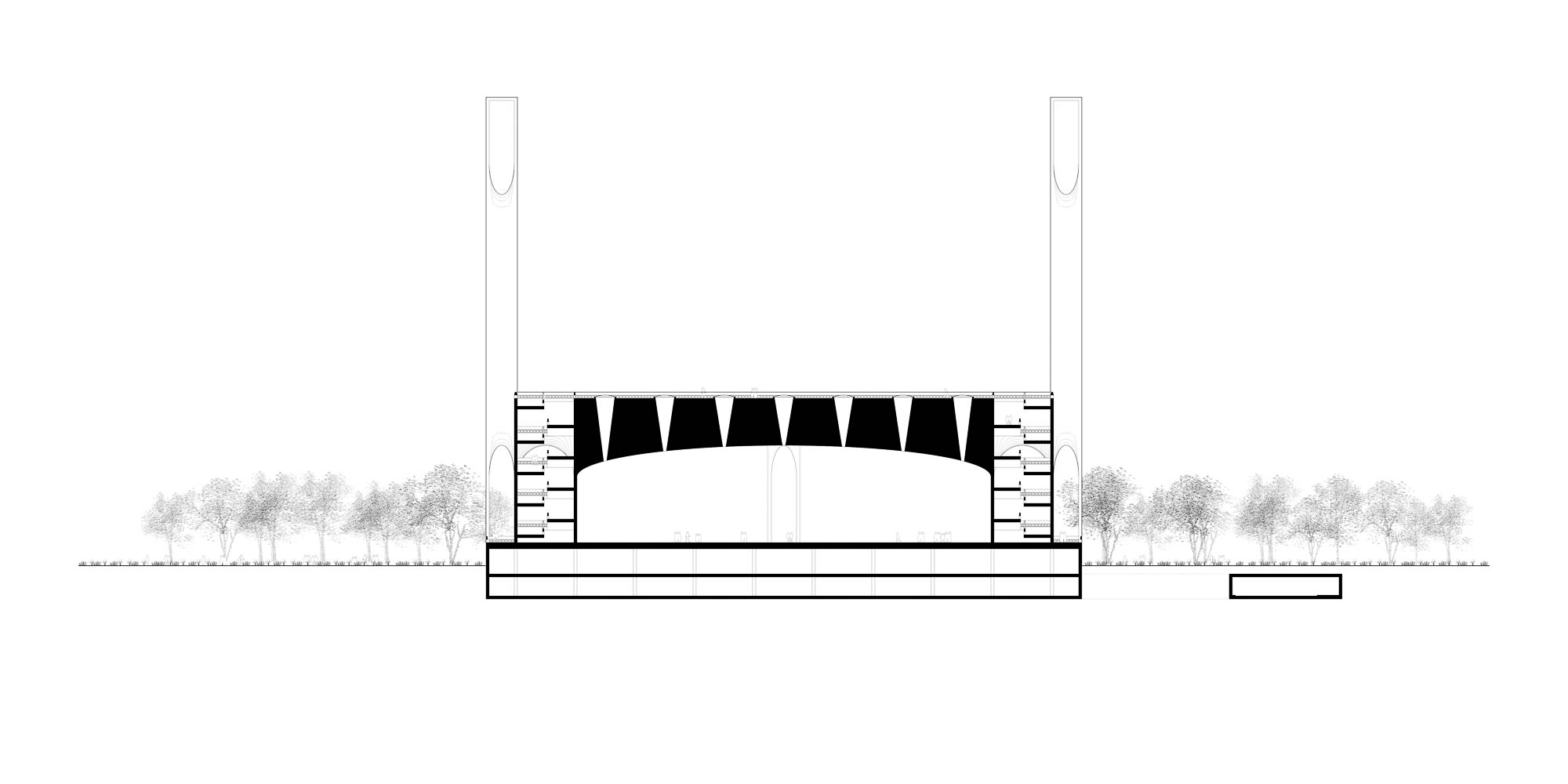 Sited in a privileged location on the banks of Dubai Creek Harbour, our proposal for a new iconic Mosque envisions an architectural language that is timeless in its materiality and tectonic principles, respectful  with  the Islamic craft and tradition, and innovative with the integration of a new topological approach.
The building is designed symmetrically along an east-west axis, inviting visitors from Dubai Creek Plaza to enter a generous forecourt delineated by the rhythmic pattern of a vertical colonnade.  This arrival sequence frames an axial view of the prayer hall: a monolithic stone volume with a grand entrance into a sacred realm. Upon entering, worshippers are received in a space of monumental proportions: a stone-clad hall featuring a vaulted ceiling with an array of skylights, producing a visual choreography of light and shadow. Flanking the prayer hall on the North and South side, two circulation ramps invite visitors to a grand accessible roof terrace offering unparalleled views of the surroundings.
Our design investigates the use of double-curved vaults as a new topological approach in the design of religious structures. Present in a variety of building typologies across the Middle East, the vault is a tectonic element that takes advantage of basic geometric principles as a means of achieving a highly efficient distribution of forces whilst producing a rich spatial experience. Our design takes this one step further by looking at a type of minimal surface known as the “Scherk” surface, generating a self-supported structural system that locally minimizes its area through a network of bridging arches arranged in a modular checkerboard pattern. Our design is thus organised as a series of symmetrically disposed double-curved vaults of varying scale– ranging from the monumental proportions of the grand prayer hall to the slender profile of the minarets. The result is a rich and cohesive architectural language that not only enriches the spatial experience of the visitor, but proposes a new paradigm for the design of sacred architecture across the Middle East.