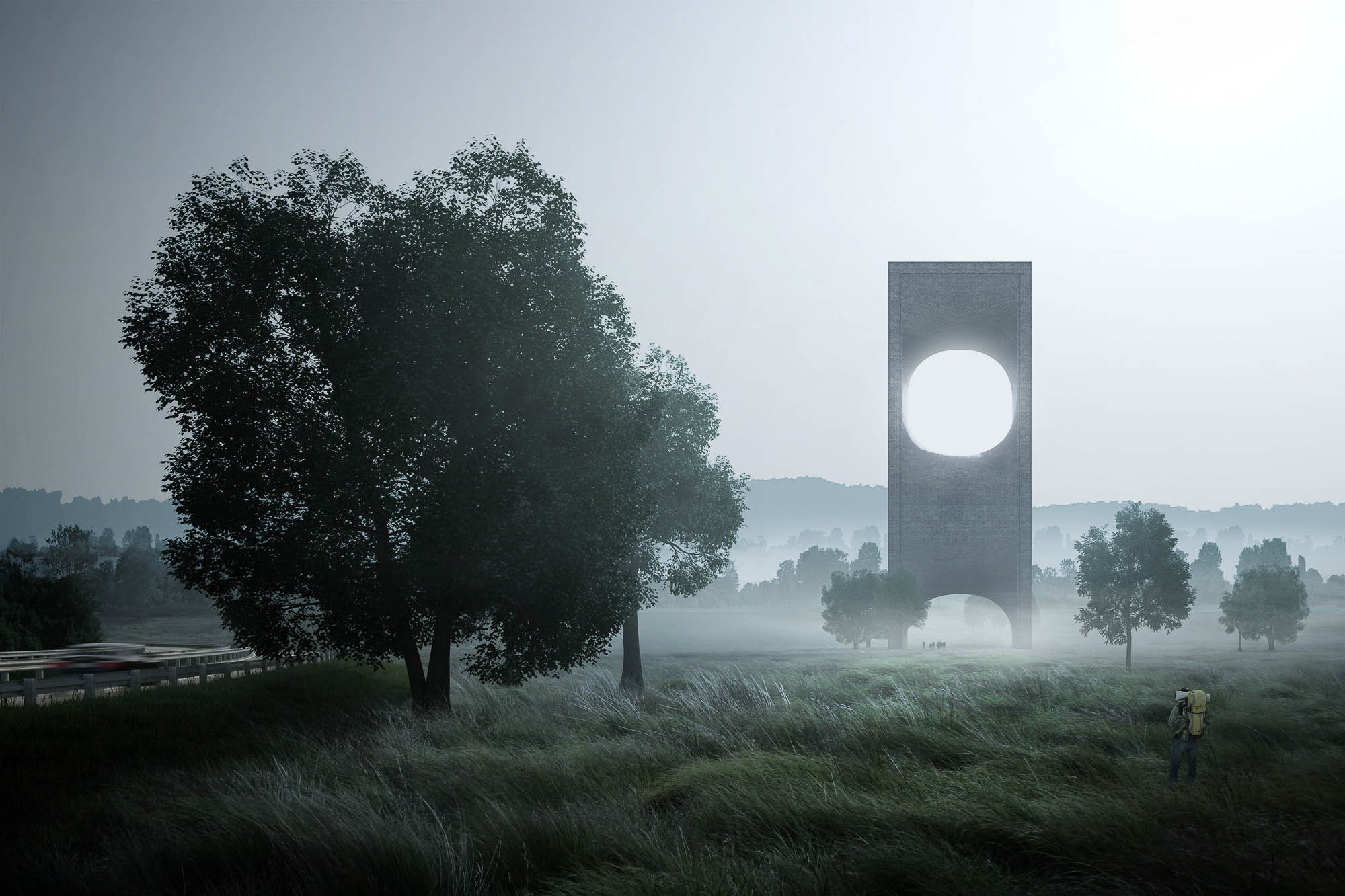 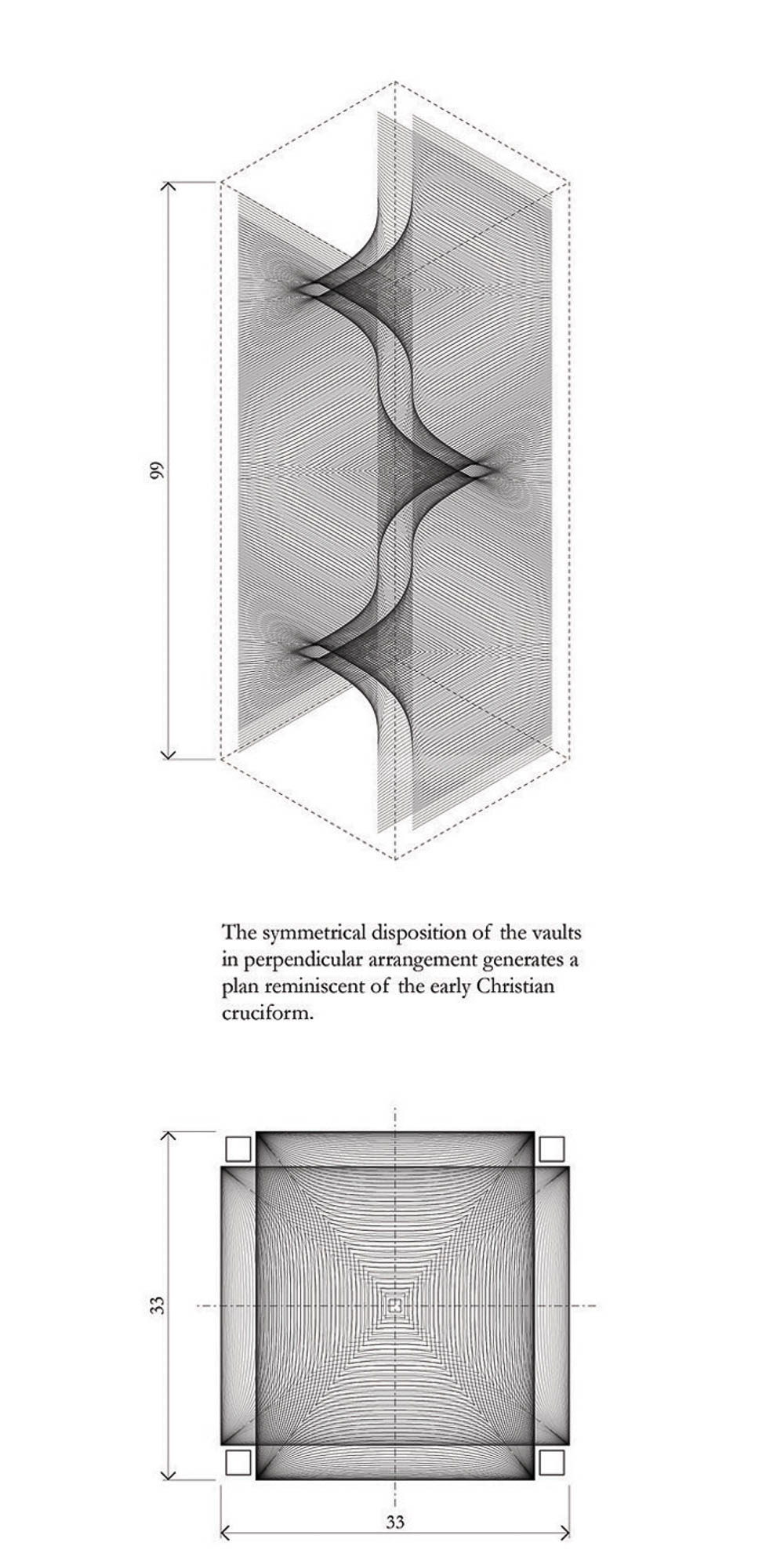 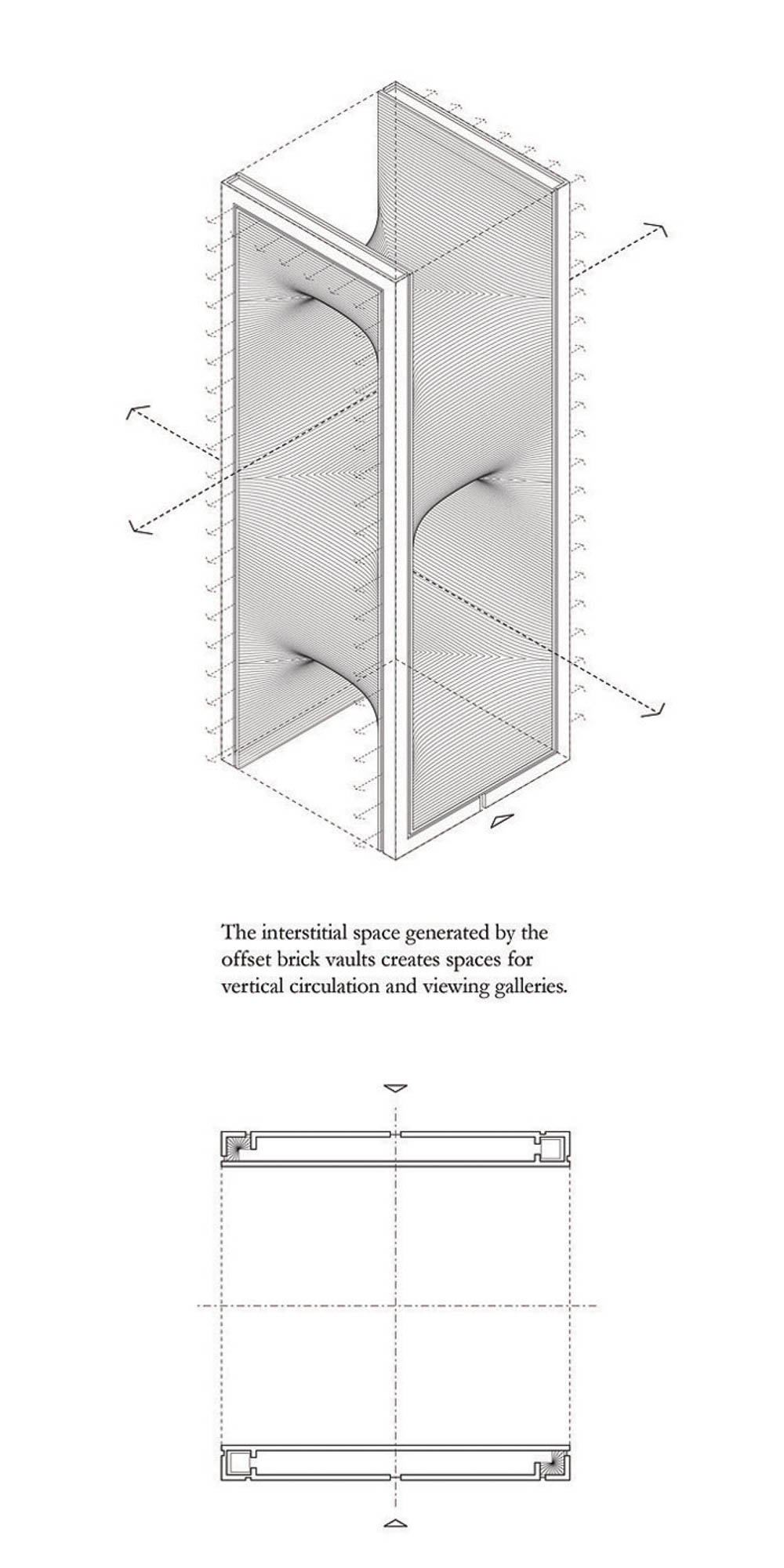 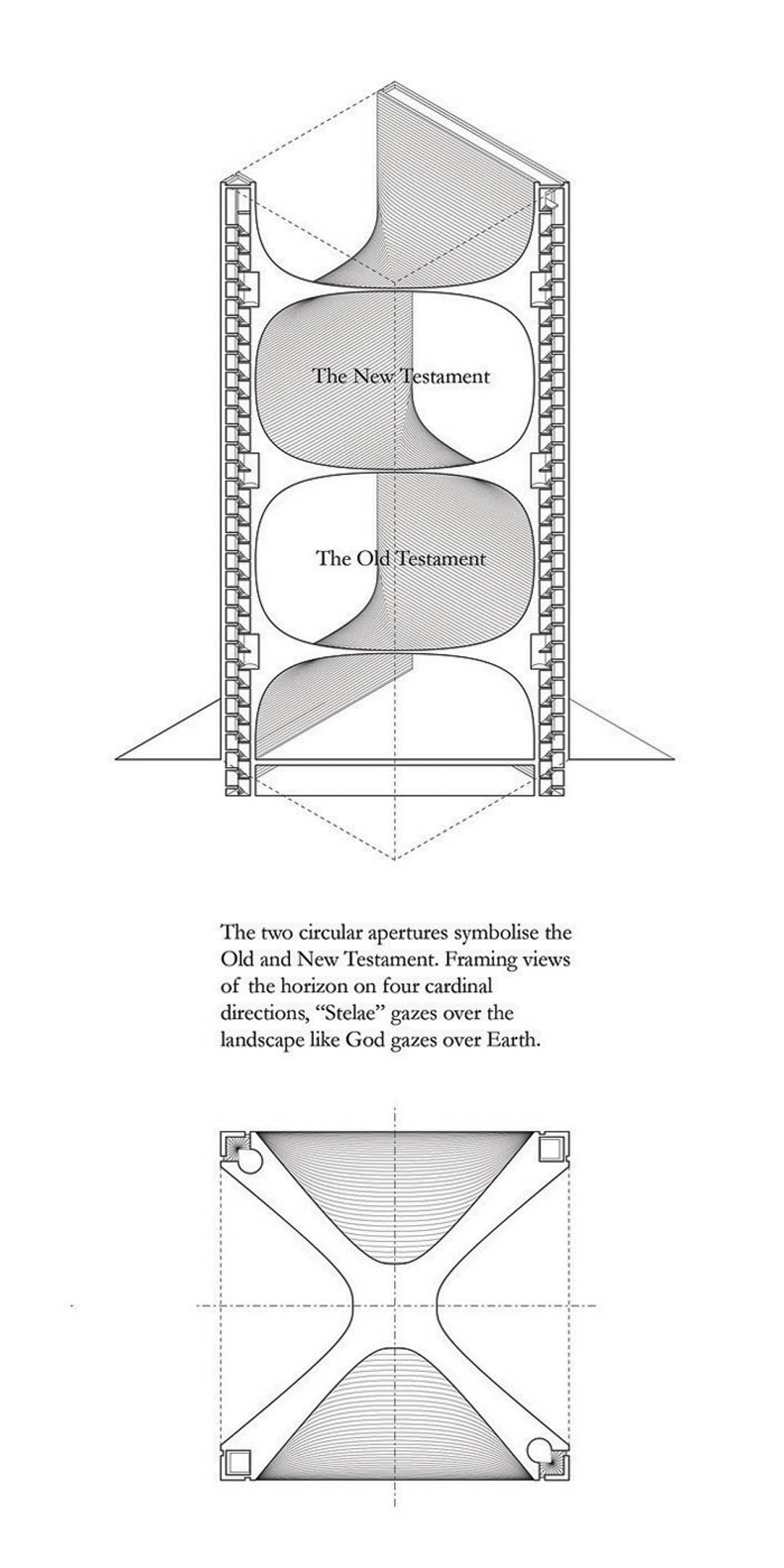 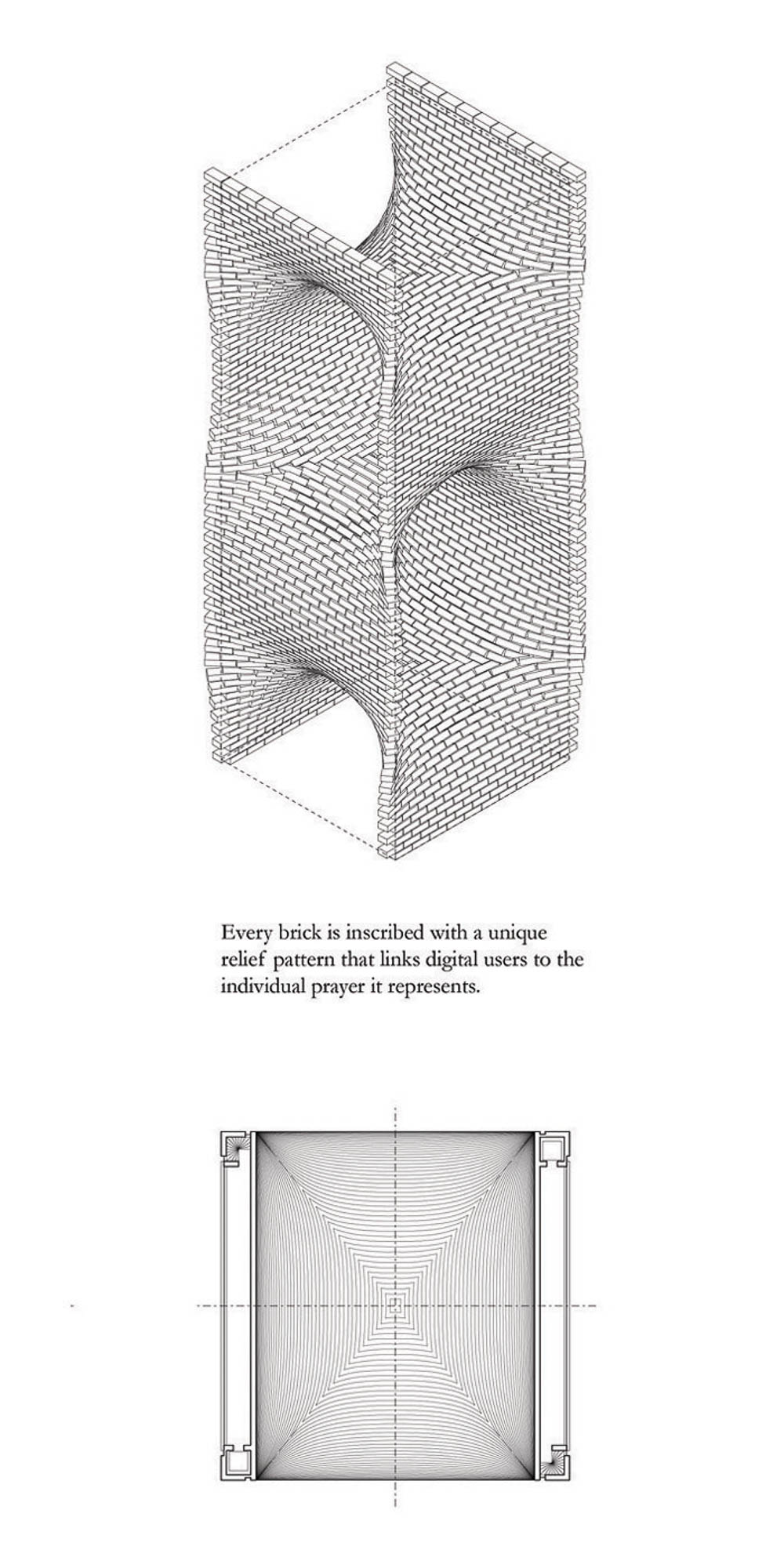 Standing tall against the horizon, Stelae emerges as an abstract monolith in the English countryside. At a glance, its form is not immediately familiar and its sheer scale is not immediately measurable; but its formal dialogue of sinuous curves and austere geometry instantly drive the attention of passers-by in the nearby motorway. A structure that –by virtue of its scale, its sublime form, and its open embrace of the natural landscape– incites bewilderment, reflection, and prayer.

As a symbol of modern-day Christianity, Stelae draws from the symbolism of the commemorative monuments of early christianity, and challenges the architectural paradigms of traditional sacred spaces. It recognises that nature, light, and shadow all play a role in our appreciation of God; and invites a sense of reverence and respect for His creation in a unique and unexpected way.

Formally, Stelae presents itself as an austere monolithic tower: a carefully proportioned structure of brick and mortar conceived as a modular stack of three self-supporting vaults. The curved geometry of these vaults articulates large concave voids that frame views of the surrounding landscape. Reaching vertically towards the sky, the project draws the eye of the visitor up towards Heaven, emphasising the highness of God. Its two large openings frame views of the horizon on four cardinal directions, gazing over the landscape like God’s omnipresent eye gazes over Earth.

As an architectural object, Stelae is infused with multiple layers of Christian symbolism. Its footprint measures 33 by 33 metres, one for every year of Jesus’ life; and its tripartite structure echoes the image of the Holy Trinity. The symmetrical disposition of the vaults in perpendicular arrangement generates a plan reminiscent of the early Christian cruciform, and its two gazing circular apertures stand as symbols of the Old and New Testament.

The landmark is set to last for generations to come. Materiality is kept austere and humble, embracing the process of natural weathering, minimising the frequency and cost of maintenance, and allowing the building to slowly develop a textured coloration patina that will help it blend with its surrounding context.

Client: Network, The Evangelical Council for the Manchester Area Trust